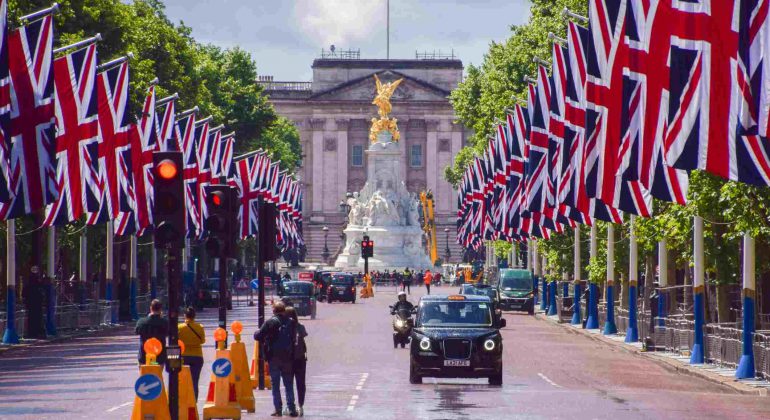 On 6th February 2022, Queen Elizabeth II completed her 70 years of reign over Great Britain and became the first British Emperor to commemorate a Platinum Jubilee. The government has announced holidays from 2nd June to 5th June 2022 to celebrate different events in honour of the Queen’s unprecedented services to the people of the UK, the Commonwealth, and the Realms.

Since the start of this year, the people and communities across the Commonwealth have been celebrating public events, parties, and other activities regarding Queen’s services. However, this special holiday week – 2nd June to 5th June –  will allow people and communities throughout the UK to join the state-level celebrations of the Queen’s platinum jubilee 2022.

The concept of Jubilees dates to biblical times when every 7th year, the event was celebrated to reorganise the state’s land management and political structure. Over time, popular belief transformed, and people considered the Jubilee year as the time when God became more generous and attentive to peoples’ needs.

Throughout the history of Great Britain, Royal Jubilees have been celebrated to honour the monarchs who served their land. The Jubilee milestone is categorised into four categories: Silver (25 years), Golden (50 years), Diamond (60 years), and platinum (70 years). The royal Jubilees include significant activities and events celebrated in the UK and some other countries.

Is Queen Elizabeth the Longest-Reigning Monarch?

In February 2022, Queen’s platinum Jubilee 2022 marked the 70th anniversary of Queen Elizabeth’s accession to the British throne. Moreover, this is the first time in history that any British emperor has achieved this milestone.

Queen Elizabeth surpassed Queen Victoria’s (her great-great-grandmother) ruling record of 63 years in 2015 and thus became the longest-ruling British monarch. HM, the Queen, is already famous for her long reign and interests in political affairs of the government, apart from her royal obligations. She is also credited widely for modernising several aspects of the traditional British monarchy.

As a constitutional monarch, Queen Elizabeth’s reign witnessed some major political shifts such as the decolonisation of Africa, devolution in the UK’s Parliament, the UK’s accession to the European Communities (EC), and finally, the BREXIT.

Amidst the decade of social and political changes, in 1965, the Queen paid a 10-days official visit to West Germany. The visit symbolised the settlement between the two countries after World War II and helped recognise Germany as a remerging power on the world map. This was the first official visit since 1913 by a British royal.

To celebrate her 25th year as the ruler of Britain, on 7th June 1977, the Queen rode out to the streets from her Palace in a beautiful pink outfit. Seeing the happy and welcoming faces, she pledged to dedicate her life to serving her people. Later, the Queen visited New Zealand, Australia, and the Pacific Islands as a part of her Jubilee tours.

After her return, she visited the countries in England, Scotland, and Wales and finished the tour by hosting a garden party at Hillsborough Castle in Northern Ireland.

The UK government recognised China’s sovereignty over Hong Kong in 1984. Later in 1986, the Queen paid an official visit to China to strengthen the previously made agreement. She was the first British monarch to visit Xi’an’s terracotta warriors, the Great Wall of China, and other historical places in Beijing.

Queen Elizabeth’s 50th anniversary as a British monarch came with rather upsetting news when Queen’s mother and sister died. However, the Queen stood strong for her people and travelled more than 40,000 miles in different countries as a part of the Jubilee tour.

The countries she visited on her Golden Jubilee included Canada, Australis, the Caribbean, and New Zealand, as well as 70 cities in 50 countries of Great Britain.

2011 – Queen’s Official Visit to the Republic of Ireland

The Anglo-Irish relations have remained bitter throughout the vast part of history. In 2011, Queen Elizabeth and her husband, Prince Philip, visited the Republic of Ireland to begin a new era of friendship between the two countries.

Although the Queen had visited Northern Ireland several times in the past, this was the first time in 100 years that a British monarch visited the Republic of Ireland.

Queen Elizabeth acceded to the British throne on 6th February 1952, after her father’s death. The same date in 2022 marked her 70th anniversary as the longest-reigning British monarch. This year, even before the accession day, Queen invited volunteers and local communities to Sandringham for cake cutting and reviewing Jubilee souvenirs.

Here’s the complete breakdown of events to occur on Queen’s Platinum Jubilee week.

The ceremony will be officially kicked off at 11 am, starting with colour trooping by the Irish Guards and the 1st Battalion. Queen’s Birthday Parade will be performed by more than 1200 soldiers and ranked officers of the Household Division. This auspicious military pageantry will also accompany hundreds of horses and army bands.

After the Parade’s completion, the Queen, along with other Royals, will appear on the balcony of  Buckingham palace and be greeted with an incredible fly past.

The lighting of beacons has been a historical tradition of celebrating Royal Jubilees in the UK. Once used as a means of communication across borders and towns, the beacons have now become a signature of royal celebrations in the UK.

At 9 pm, a special ceremony will commence in Buckingham Palace to light the Primary Beacon, aka “The Tree of Trees.” This mighty beacon comprises 350 small trees and is heightened at 21 meters. Apart from this, thousands of Community Beacons will be lit by citizens and communities across the UK. Moreover, 54 Commonwealth Beacons will be ignited in all the capitals of the Commonwealth.

To pay tribute to Queen’s service to the UK, a Thanksgiving Service will be held at St. Paul’s Cathedral on Friday, 3rd June. As a part of Thanksgiving, St. Paul’s bell – the largest church bell in the UK –  will be rung. This year, it is a unique activity because the church bell has never been rung before on any Royal occasion.

The Queen will arrive at Epsom Downs Racecourse to watch the UK’s richest and most prestigious Derby (horse race). The arrival of the Queen will make this historical event even more peculiar.

On Saturday night, a huge party will be thrown at the Palace hosted by two famous faces of the entertainment industry, Roman Kemp and Kirsty Young. The event will also be covered live on the BBC network, BBC iPlayer, and BBC One. Media icons and musicians will grace the party night with musical tributes and performances to celebrate the Queen’s Platinum Jubilee 2022.

The event will be attended by 22,000 spectators, with 10,000 seats granted through a public poll and 5,000 tickets reserved for necessary staff. For the first time, the BBC has revealed pictures of the magnificent location and stage where the artists will perform their acts.

More than 60 thousand people have shown their interest in arranging Jubilee Lunches on Queen’s Platinum Jubilee weekend 2022. The event will be not only specific to food parties but also hold several other activities like world record attempts for the largest street party.

As part of this nationwide gesture of communal fellowship, over ten million people are anticipated to attend Big Jubilee Lunches around the UK to enjoy friendship, food, and fun.

The Sovereign’s Escort, headed by The Gold Carriage, will lead the Platinum Jubilee Pageant. The Pageant will provide a platform for people to come together and show their respects to Her Majesty the Queen. In the end, the National Anthem, ‘God Save the Queen,’ will be performed by a gospel choir and Queen’s Royal Marines Band.

More than 10,000 people will participate in celebrating this iconic Pageant, including military personnel, celebrities, key workers, and volunteers across the UK and the Commonwealth.

The jubilee medals are awarded as a token of thanks to the serving members of the Armed forces, Police, emergency services, fire department, and prison services. This first medal was awarded in 1887 on the Golden Jubilee of Queen Victoria’s reign.

This year’s Jubilee Medal will mark the Platinum Jubilee by following the long history of awarding medals as an appreciation to the frontline service members. Queen’s Platinum Jubilee medal, designed by Timothy Noad, features the Queen’s face impression with the Latin engraving “Elizabeth II Dei Gratia Regina Fid Def,” which means “Elizabeth II. By the Grace of God, Queen, Defender of Faith.”

Queen’s Platinum Jubilee medal is made of silver and nickel and sponsored by Worcestershire Medal Service, Birmingham.

Being one of the highly trusted mobile networks in the UK, Talk Home is highly delighted to escalate the fun on Queen’s Platinum Jubilee celebrations. Talk Home is offering major discounts and rewards on all its products and services. Here’s a list of all exciting Jubilee Special Offers.

If you want your friends and family across the UK to join the ceremony virtually, try Talk Home’s cheap monthly plans to enjoy this once-in-a-lifetime moment with your loved ones. You can also stream all the events live with Talk Home’s super-fast 4G connectivity.

Must read: The Best SIM Only Deals to Consider in 2022

GSM vs CDMA Phone – Everything you need to know

Internet Trend Across the UK in 2021: A Year In Review