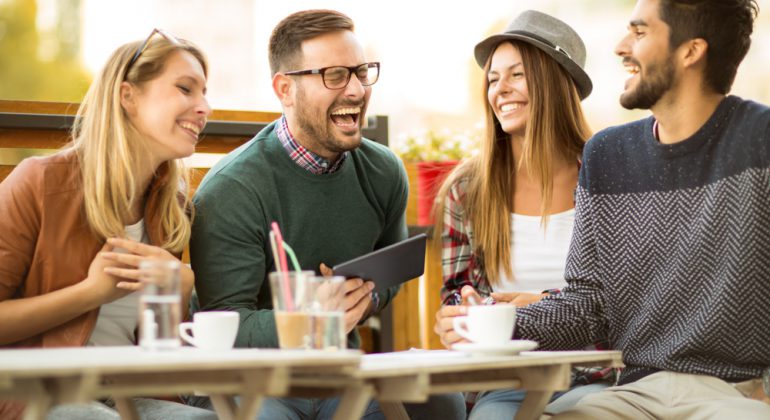 Why Are Jokes Important in Our Lives?

Laughter, however shallow, is the key mechanism to cope up with sickness, anxiety, and global pandemic. Throughout history,  jokes have played a vital role in the darkest times as a psychological salvage, contributing to collective stress relief. And what other occasion can best fit the bill to crack a joke with your family and friends than the International Joke Day on July 1.

Covid-19, by far is the worst time in our lifetimes and laughing while others suffer may seem inappropriate, but even concentration camp prisoners found humour during the Holocaust, according to the 2017 documentary, “The Last Laugh.”

Some stories from the First World War are filled with gallows humour. In one unverified tale from the trenches, a bagpiper plays the pipe to raise morale. The enemy, fearing the sound to be signalling an imminent attack, started shooting from their trench, forcing everyone to take cover and the piper to stop playing. The piper starts again once the shooting subsides, triggering the same set of events. Undeterred, the piper gears up to start for the third time when someone shouts: “For Heaven’s sake, play something they like!”

This July 1, we ask you to take some time out of your day to recognise the importance of humour in our lives in keeping stress at bay, building strong relationships, and bringing mirth to a world that badly needs it. Share a laugh by messaging your father, mother, spouse, post jokes on social media and appreciate the stand-up comics, who leave us in stitches all the time.

Jokes are among the oldest forms of storytelling. Humour has changed a lot, but many of our jokes have their roots in antiquity. We can trace back the “chatty barber” gags back to Archelaus, a fifth-century BC King of Macedon. The Roman Philogelos, a compilation of intriguing gags that survived from the classical world.

Back in time, there were plenty of other books of the type, as the collection of “wit and wisdom” of rulers and politicians seems to be a thriving genre in the Roman period. Similarly, the pompous Marcus Tullius Cicero, Rome’s celebrity orator, was well known for his wit. His bons mots were compiled in three volumes. One of the famous excerpts was his swipe at his son-in-law, a short chap equipped with a long sword; Cicero said, “Who tied my son-in-law to his sword?”

There are many joke formats and structures constructed around the basic formula of backdrop and punchline. Jokes are a unique way of storytelling; even the kid-friendly knock-knock or one-liner jokes have the flair of a narrative arc. Some of the most popular types of jokes are:

Observational jokes are the examination of everyday situations or things going around as seen through a comedic lens. If you have ever seen Michael Mclntyre perform comedy, you have seen observational humour and jokes. Observational comedy covers almost every aspect of life known to everyone, even the trivial ones.

Situational jokes are a comic spree around a specific character, place, situation or event. The situational humour genre is particularly popular on television or sitcoms – centred on a fixed set of characters in different scenarios. Some popular sitcoms are Big Bang Theory, Friends, and Black-ist.

Anecdotal comedy takes its name from the Greek anecdote meaning unpublished, which refers to the personal stories adorned with a comic flair. This type of humour is very popular with audiences as everyone can relate the stories to their own life. Most of us have heard Kevin Hart, Daniel Kitson, and Russel Peters ranting their personal stories in a hilarious way. Writer, director, producer, and sometimes a stand-up comedian, Judd Apatow, considers that stand-up comedy becomes better with a more personal touch – where comics lay themselves bare in front of the audience. Anecdotal comics are often the strongest performers and get the most laughs as the audience resonates in their story or joke.

As evident by the name, the jokes are delivered in a single line. An excellent one-liner joke is said to be pithy – short and meaningful. One-liners squash the setup and punchline into a crisp, concise thought. “I regret rubbing ketchup in my eyes, but that’s Heinz sight.” Nick Helm delivered that one-liner.

Comedians are famous for creating different personas for delivering humorous jokes, often from stereotypes. Christopher Ryan of the comedy series “The Young Ones” and Jim Carrey from “The Mask” played fictional versions of themselves to deliver funny jokes.

Irony jokes are the opposite of the literal meaning, with two opposing concepts tugging at one another. Sarcasm is a form of irony directed at a person to joke about by saying something of double meaning, such as saying “I love your dance moves” to a friend who is a terrible dancer.

Farcical jokes are over-the-top plotting with exaggerated and ridiculous characters, stories, and events. For example, The Hangover movie series are characterised by the use of physical humour, deliberate absurdity or nonsense—satire, mockery, and parody of real-life events, people, or situations.

An understatement or deadpan joke is where someone deliberately plays down something of significance. Deadpan humour is making jokes without smiling and a dead face expression, delivered in a matter-of-fact and monotone voice. Milton Jones is a deadpan comedian, and the humour comes from the blend of trivial content and emotionless utterance of the joke. “I hate sitting in traffic because I always get run over.”

Comedians are popular for making fun of themselves. Rodney Dangerfield always makes jokes poking fun at his looks and his love life. “My wife’s so dumb; she got a nail in the spare!!” “My car broke down just the other day, I called triple-A, they came and towed me away!”

Also known as physical comedy, slapstick comics use physical movements and gestures. Charlie Chaplin is the ultimate example of physical comedy in “Modern Times,” “The Gold Rush,” and “The Circus.” The Three Stooges are another famous slapstick group, getting into absurd situations where they would get slapped, bonked or hit by someone in a comedy of errors.

What You Should Do This International Joke Day

Joke Day is the ideal time for you to share laughs and put a smile on people’s faces. Whether you love to share jokes or listen to them, the day is all about laughing and sharing the fun. Who wouldn’t like to create a jolly, healthy environment boosting emotional and physical health? This International Joke Day, laugh and share the giggles with your loved ones.

Break a Joke to Your Loved Ones

Every country and place has its own unique set of humorous jokes, and July 1 is the best time to share your favourite piece of culture with a laugh. No matter our personal differences and hectic life schedule, we can still share a good belly laugh with our friends and family by sending them a joke you share from the past. International joke day is a good reminder that humour is human, and it binds us together.

One of the best things you can do on International Joke Day is to head over to the comedy club nearby and support the comedians. Comedians are often neglected and made fun of without realising they are the ones filling our lives with a hearty dose of laughter. Whether a small local club or an established business with top comedians, your support means we’ll have a steady stream of one-liners coming in for years to come.

Not all of us are good at cracking jokes. It is a lot more than memorising a few lines. You’ll have to do it at the right timing while reading the audience, and the delivery matters the most. Therefore, why not take this opportunity to learn and practice a joke? Consider the context and surroundings in which you might use it, practice the delivery, and finally test it out with your friends. If it goes well, you have got a joke in your back pocket you can crack at any awkward dinner party.

How to Stop Robocalls and Spam Calls : A Complete Guide

How to Make International Calls? A Complete Guide