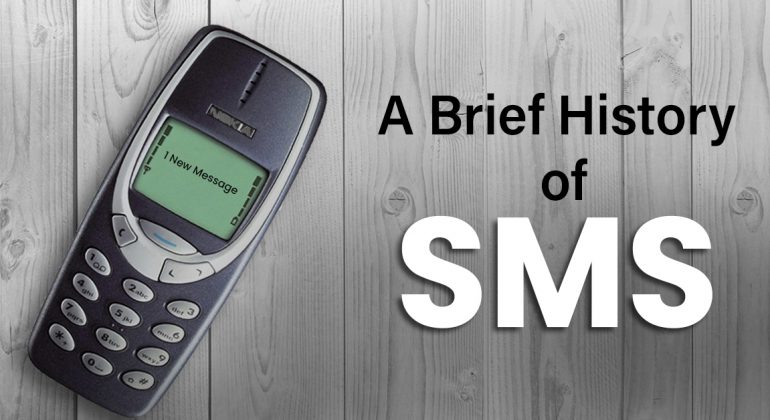 Text message (SMS), the technology that spawned the language of shortcut spellings and punctuation signs, is more than 2 decades old. Communication and information technologies have rapidly evolved over the last few decades. Even so, being a fraction of the size, today’s smartphones are more powerful than the desktop computers of the 1980s and 90s. Here we tried to dig deep into the history of SMS to see where it has come from.

Today no one can imagine a life without text messaging or SMS (Short Message Service). Where you’re not able to send a quick note that you’re running late, reaching the gym, or coordinate a meeting with coworkers without having to make a phone call. The revolutionising technology allowed us to be more efficient, independent, and have direct interactions. Around 5 billion people send and receive SMS messages globally, amounting to 65 per cent of the world’s population.

Smartphones are full of features like GPS, cameras, accelerometers, and advance GSM technology. That makes them way better communication devices than traditional, old landlines or cellular phones. To send a simple text message, one had to put the thumbs to work on a tiny 10-number keypad (autocomplete was not a thing back then).

However, with the latest technology, you can send long-winded text messages, videos, images, GIFs, live location, top-ups, and now even sending money in a flash. This communication technology has come a long way and is worth looking back at the technology and how it shaped society.

SMS as We Know it

Early GSM mobile phones didn’t have the ability to send text messages. The network notifications for voice mail messages were the first SMS gateways for cellphones. Nokia was the first phone manufacturer in 1993 with a complete GSM phone line that supported SMS text messages. Similarly, Nokia became the first company in 1997 to produce a mobile phone with a full keyboard – the Nokia 9000i Communicator.

Text messaging as we know it started in 1984, first conceived by Friedhelm Hillebrand and Bernard Ghillebaert. There was a limit of 160 seven-bit characters for the SMS messages. So, the message could fit into the existing signalling formats.

However, some consider Matti Makkonen the “Father of SMS” for his idea of a mobile phone messaging service. However, the Finnish engineer doesn’t consider himself the inventor. And credits the technology as a result of the collective effort of a large number of engineers.

The first text message was sent in 1992 by Neil Papworth to his friend from a PC because, at that time, phones didn’t have keyboards to type the message. The first SMS text by Papworth, a former developer at Sema Group Telecoms, was successfully sent to Richard Jarvis at Vodafone. The message read “Merry Christmas” using Vodafone’s UK network. The heartwarming message by the 22-year test engineer made texting history.

In 1993, a year later, Brennan Hayden, an Irish engineer at Aldiscon, sent the first commercial text message that said “burp.” The message didn’t have anything to do with gastroenterology but actually signified the birth of a new form of communication. Later in the same year, Nokia became the first phone manufacturer to support text messages on its total GSM mobile phones.

SMS stands for “Short Message Service” and is interchangeably used with “text messaging.” Initially, the SMS messages only comprised text; though, now they can also include multimedia messages. That is generally known as MMS, featuring images, emojis, videos, and GIFs.

Another milestone in the history of text messaging was achieved in 1999 by the introduction of cross-network texts. Before the technology, SMS messages could only be sent to the people who share the same service provider with you. The texting boom at the beginning of the 2000s became mainstream, with 35 texts per person per month in the United States. Like today, texting was popular among college students, which The Wall Street Journal named “a new fever.”

By 2002, text messaging has reached the global masses and recorded over 250 billion messages sent in a single year. The technology found new use and integrated deeply into society when in 2003, American Idol introduced “text to vote.”

Texting becomes the most prevalent mobile service worldwide by 2007 and was used by 2.4 billion out of the total 3.3 billion mobile users. By 2008, the “text to donate” campaign was launched by United Way during Superbowl XLII. Also, famously Obama used the “text to donate campaign” to win the election using SMS software to send bulk text messages to increase his grassroots support.

See here: How to Write a Professional Text Message

The first type is known as multi-tap, where each number on the phone keypad is connected to either three or four letters. For example, the “2” key displays “A”, “B”, “C” and is pretty straightforward but not very efficient.

In 1995 came the autocomplete of texting, unlocking the door to faster texting. The earliest autocomplete technology was called “T9”, making the texting experience very smooth using the 10-digit keypad. The T9 was a predictive text technology showing words from a single keypress instead of multi-tapping. The technology gets familiar with the words and phrases frequently used by the texter.

While Nokia released the 9000i Communicator in 1997, featuring the first QWERTY keyboard. The first touchscreen later referred to as the first “smartphone,” was created at IBM in 1992. But the advanced smartphone with a multi-touch interface and virtual keyboard was introduced by Apple in 2007.

The virtual keyboards included automatic spell check, predictive text technology, and the power to learn new words. The keys became adaptive and larger according to the phone’s landscape or vertical orientation.

Also, 2007 was the year when Americans sent and received more text messages per month than phone calls. SMS messaging became a universal phenomenon for phones, making it affordable and often unlimited with packages.

Texting in the Modern Era

By 2010 texting was a universal practice in many cultures. As a matter of fact, the verb “texting” was added to the dictionary in the same year, which wasn’t a surprise given the massive 6.1 trillion text messages sent worldwide.

Texting reached a staggering 7.4 trillion SMS messages being sent in a year back in 2011 until instant messaging became more popular. Social media, email, Skype, International calling and texting applications like Talk Home App have broadened options outside of only text messaging.

In 2013, internet-based instant mobile messaging services like Facebook Messenger, Viber, and Whatsapp caught up with the popularity and volume of SMS messages. Even in 2019, SMS messaging is not extinguished and is growing at 4 per cent per year. Businesses are increasingly using the medium to connect with customers, employing SMS software. There might be a shift in the use of technology, but it’s still widespread use by the world.

Want to Connect with No Limitations

SMS messaging will most likely stick around for a long time, as it’s the most practical option for anyone living in an area with limited, unreliable, or unaffordable mobile data. If you ever want to connect with your loved ones while on the move, use Talk Home App’s bundles that offer virtually unlimited SMS messaging.