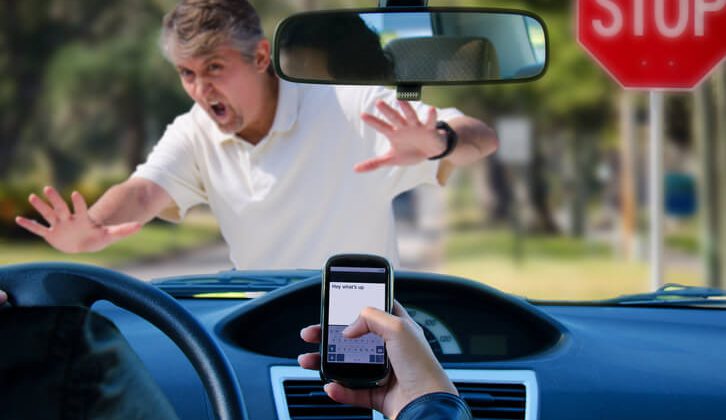 Do you know what the top concern of the UK’s majority of drivers is? It’s the other driver using phone while driving, according to the 2020 Report on Motoring. About 13 million people believe so, almost a third (32%) of the UK’s 40 million drivers in total.

It is not easy to come up with an accurate figure on the number of accidents that result from the driver using a phone while driving. However, 43 deaths and 135 serious injuries were recorded in the UK during 2017, according to a House of Commons Transport Committee Road Safety Report published in 2019. 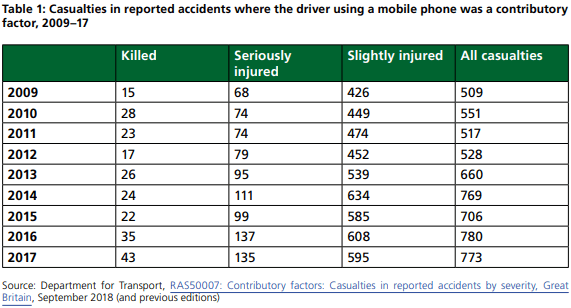 THINK! is a famous road safety campaign. It claims that studies show that using mobile phones while driving affects the drivers’ response time in recognising and reacting to potential hazards on the road.

The 2020 Report on Motoring has come up with some alarming stats in this regard on motorists who admit to using mobile phones while driving.

The report also reveals that:

How Does Using a Phone While Driving Cause Distraction?

Even the most careful drivers cannot get away from a momentary lapse in concentration due to an incoming text or call. And that split second distraction often turns out as the most significant factor in stopping timely and crashing a vehicle.

To better understand this, we should explore distraction under these circumstances further.

What is a distraction for someone behind the wheel?

When a driver ends up paying more attention to any activity other than driving, it’s a distraction. Multitasking doesn’t remain a safe option when driving, especially when the second activity is a bit complex or time-consuming.

Since the second activity also needs attention from the driver, it is highly likely to affect their concentration more than when they are not performing any other action. As a result, the driver’s observation level may suffer, compromising their level of control over their vehicle. The ability of drivers to anticipate hazards lowers substantially under such conditions, increasing the probability of crashes and accidents due to the distraction.

Things are happening quickly on the road. So, you need to be proactive in avoiding any inconvenience for you and other vehicles on the road. Many drivers believe they are too good or too experienced to prevent mishaps, but it’s more an illusion than reality. Any lapse in concentration, no matter how short it seems, can lead to a crash.

You’re overlooking an important factor here. Your experience may help you avoid making any mistakes, but can it help compensate for some other driver’s miscalculation? Of course not. Balancing other driver’s omissions is only possible if you’re fully aware and in control of your vehicle, which won’t be the case if you are distracted by your mobile.

What are different types of driver distraction?

You must not use a handheld phone while driving because it can create multiple types of distractions, such as visual distraction, cognitive distraction, biomechanical and auditory distraction.

Vision is one of the most important senses for safe driving. And a visual distraction happens when a driver sees objects or events capable of impairing their observation of the road environment. The more attention such objects or events demand from the driver, the less attention they dedicate to the road environment. The complex and attention-seeking visual distractions make it difficult for drivers to identify the main hazards ahead. While a driver’s attention is drawn to a visual distraction, responding to an unexpected event takes slightly more time than when they’re not distracted. And we all know that these fractions of seconds can become a matter of life and death when driving on the road.

You can explore more on this topic on The Impact of Internal Distraction on Driver Visual Behavior.

Cognitive distraction occurs when a driver thinks about something not directly related to the driving task. It can lead to “inattention blindness” – a condition where drivers look through the windscreen but cannot efficiently process what’s in their field of view. Again, this can result in delayed identification and response to potential hazards on the road. A National Safety Council White Paper refers to a particular tendency of drivers using hands-free mobile phones – ‘look at’ but ‘not see’ tendency. When so, the drivers cannot ‘see’ up to 50% of the information that their brain receives through their eyes. So, if you were wondering if you can use a hands-free phone while driving, here’s is something to relate to.

It’s the kind of distraction occurring due to the driver’s engagement in some physical activity not directly related to the driving task. For instance, reaching out for something while driving, moving out of the optimal position to drive, holding an item, and so forth.

When a driver fails to make the best use of their hearing ability due to some sound that’s not a part of the driving process – an auditory distraction is occurring. The driver’s response to an unexpected event might be delayed by paying more attention to that sound rather than the driving environment.

Many studies all over the world have concluded similarly. Using a mobile phone while driving impacts the driver’s performance negatively in several different ways, such as: 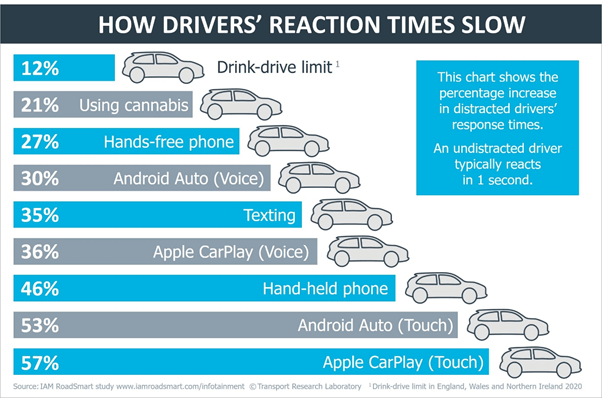 Holding a phone or sat nav while driving a vehicle or riding a bike is illegal under UK laws. If you want to respond to a call while driving, you must resort to hands-free access, such as:

Helpful Gadgets for Using Your Phone While Driving

However, any of these assistive devices must not be blocking your optimal view of the road and traffic.

You must maintain complete control of your vehicle at all times while driving. The police can stop (and prosecute accordingly) if they think you’re not in control of the car because of any distraction.

This law is still valid if you are:

The penalty for using a phone while driving may vary depending upon the frequency and intensity of the type of driving misconduct you commit. The list includes:

When Can You Use a Handheld Mobile Phone Driving a Vehicle?

You can do so only:

How Can You Receive a Phone Call Minimising the Distractions & Risks?

Responding to your phone when you’re driving is not advisable under any circumstances. So, you better avoid:

However, if you find it inevitable to attend a call, for instance, in case of a potential emergency or a loved one calling from abroad after ages, properly park your car in a parking space, turn the engine off and respond to it.

Talking of calling abroad, no one can facilitate you like Talk Home Mobile. From cheapest calling rates for about 250 destinations worldwide to international top-ups on more than 500 global networks, you get the best in everything. Not to mention that they connect you using local lines for exceptional voice quality.

Life is too precious to lose in a car crash due to a distraction caused by a mobile phone, right? If you’re alive and well, you can tend to anything you want in due time. So, make sure to adhere to all safety measures and choose life over urgency!

User Guide: How Not to Be a Victim of Mobile Phone Scams