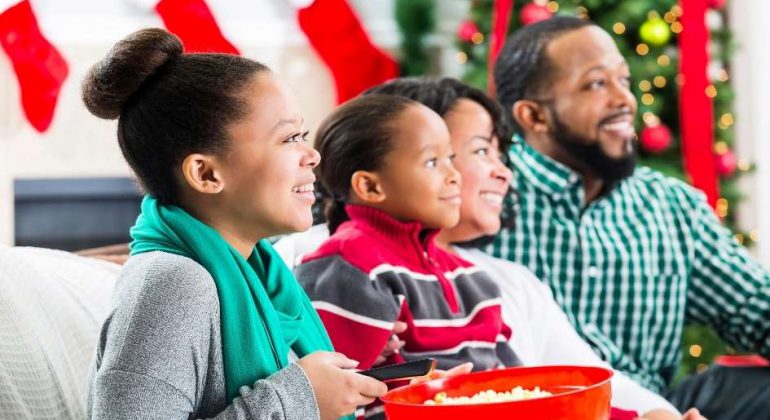 The Christmas holidays for 2021 are here, and we are in the mood to watch exciting Christmas movies. Do you also want to make your holidays a lot more fun? If yes, this article will be an absolute treat for you!

When it comes to streaming, Netflix has become one of the most dominant and easily approachable platforms. It offers millions of original films and series with tons of beloved classic titles that make it a powerhouse today! Furthermore, this year Netflix is loaded with fantastic Christmas series full of cheesy romance, adventures, horror, comedy, and eternal favourites. So, to get a chill dose during holidays or to enjoy family time on Christmas –Netflix streaming is the way to go!

Here we will share our ultimate selection of the best Christmas movies on Netflix that help you enjoy your holidays to the fullest. So, let us get started!

If you are fond of intimate and unconventional series, “HOLIDATE” is the one for you! Netflix’s new festive romantic and comedy film “Holidate” has become a hit in the streaming industry. The movie is loaded with entertainment, making it a popular choice on Netflix.  Here, you will see the love chemistry between two strangers (Emma Roberts and Luke Bracey) who are fed up with being single on their holidays. They decided to be each other’s spiritual mates to catch real feelings and enjoy all their celebrations, from parties, weddings, to holidays. So, what is the end of their friendship? To know this, hop on your Netflix and watch this movie!

Releasing date:  The movie was released on Netflix on November 08, 2019.

“Last Christmas” is one of the good holiday movies to watch on Netflix! Henry Golding and Emila Clarke are the captivating stars of this fairy-tale romantic comedy film. The film plot is based on the 1984 song of the same name and influenced by the music of George Michael. The actor (Emila) played the role of a disillusioned Christmas store worker who builds a relationship with an enigmatic man (Henry) and then begins to fall for him badly. In the end, the movie gives the optimum lesson that we can select those actions which make people around us a little contented.

Releasing date: The movie was released on Netflix on November 08, 2019.

Running Time: Its running time is 92 minutes (about 1 and a half hours).

The movie “Let it snow” is a must-watch from family Christmas movies on Netflix. It discerns three discrete stories that interlace with one another at the end. The film is based on the top-selling YA novel of the same name written by John Green, Maureen Johnson, and Lauren Myraclee. The novel revolves around high-school students in a small mid-western town during a heavy snowstorm on Christmas. Further, the film features different teenagers across Laurel playing out among snowstorms during Christmas evening.

Writer: The movie was written by Lauren Swickard.

Releasing date: The movie was released on Netflix on December 14, 2020.

Running Time: Its running time is 106 minutes (about 2 hours).

Are you looking for the family’s best Christmas movies on Netflix? The film “A California Christmas” is an excellent choice! The acting and performance are absolutely up to the mark that took it up high and made the most watchable movie on Netflix. Moreover, it is a super-hit love story on Netflix that involves a real-life couple. Callie (Lauren) and Joseph (Josh) are euphorically in love until family responsibilities and business call Joseph back to the city. So, what is the end of this romantic couple’s story? Get yourself prepared to watch this movie on your special Christmas holidays.

Releasing date: The movie was released on Netflix on December 15, 2017.

“Christmas Inheritance” can be your favourite holiday movie as it is one of the top Christmas films on Netflix. It is a Canadian comedy-drama film that tells the story of an intelligent, smart, and competent female named Ellen (Eliza Taylor). She was sent to a small New England town with bounded resources to figure out if she could take over her father’s company. Further, the film features snowfall on Christmas days, giving cozy and homey vibes! Sounds interesting? Well, it is.

6. A Wish for Christmas

Writer: The movie is written by Helen Frost, Don MacLeod, and Liam Fearnley.

Releasing date: The movie was released on Netflix on December 16, 2016.

Director: Christie Will Wolf has directed this film.

With an exciting storyline, the movie” A Wish for Christmas” is one of the best Christmas movies on Netflix UK. The film illustrates a story of a girl named Sara Thomas (Lacey Chabert), who has some unique aspects. She is the type of woman who prefers to sit idle at work with no high motives. At one time, her big scheme for Christmas initiative gets creep, and then she makes a wish to Santa for giving her a spirit to stand again. Soon after, Santa approves her desire but offers only 48 hours. So, what is her new plan? How does she manage to stand up for herself? Watch the full movie on Netflix to consummate your curiosity!

Writer: The movie was written by Nancy Meyers.

Releasing date: The movie was released on Netflix on November 29, 2006.

Running Time: Its running time is 136 minutes (about 2 and a half hours).

”The Holiday’ film is fascinating, giving you a fun time that can brighten up your mood. The movie tells a story about two different girls named Iris (Kate Winslet) and Amanda (Cameron Diaz), who are from different cities but break up with their boyfriends at the same time. After it, both women decide to run away from their everyday lives for the coming Christmas holidays and admit to switching their homes for two weeks. But will they find their love again? Set your timer and watch the full film on Netflix during your chilly Christmas holidays.

Releasing date: The movie was released on Netflix on October 13, 2004.

Running Time: Its running time is 100 minutes (about 1 and a half hours).

Are you searching for the best children’s Christmas movies on Netflix for your kids? Go for the animated film ‘The Polar Express’ – it is the first-ever movie filmed completely with motion capture. It is an inspiring adventure film based on the beloved kid’s book by ‘Chris Van Allsburg’. The film tells a story of a teenage boy who sees a peculiar train from his house window that is bound towards the North Pole stop. The boy joins the train with several other children going on a ride to visit Santa Claus on Christmas. Your kid is sure to love this movie!

Releasing date: The movie was released on Netflix on November 08, 2019.

Running Time: Its running time is 97 minutes (about 1 and a half hours).

“Klaus” is an animated holiday movie for kids – the most-watched streaming film on Netflix! It is a bundle of fun and enjoyment that makes it the best holiday tale for children and the whole family. The movie tells a story about a boy (Jesper), the worst student at his academy, so he is sent to a small frozen town in the North. There he finds a cloistered toymaker named Klaus. Afterward, Jesper and Klaus work together and make toys for children during Christmas. Watch the full movie to see how Klaus becomes Santa Claus and delivers toys to children worldwide.

Writer: John Hughes created the series based on a list of novels.

Running Time: Each part has a different running time.

The “Home Alone” series is one of the best Christmas films on Netflix for children! It is an American comedy series covering all the fundamental principles of Christmas, such as Generosity, Family, Iconography, and Excess. The series revolves around the adventures of children who find themselves alone during the Christmas holiday season. Further, they are inebriated with the challenge of protecting themselves and their family’s home from criminals and invading robbers. That is why it is a must-watch series for your children as it creates a spirit and determination among them!

Writer: The movie was written by Pharrell Williams.

Releasing date: The movie was released on Netflix on October 22, 2018.

Do your children love to watch fantasy movies? If yes, then go for an animated “The Grinch” movie! It is one of the best new Christmas movies on Netflix, and an absolute gift for the children’s special holidays. The film tells the story of a boy (Grinch) and his pet dog (Max) who live in solitary inside a cave on Mount Crumpet. Throughout the movie, they both play an intelligent role as they make a scheme to destroy Whoville’s Christmas celebrations by sneaking all the town’s gifts and decorations.

Writer: The movie was written by Chris Buck, Jennifer Lee, and Shane Morris.

Releasing date: The movie was released on Netflix on November 19, 2013.

Director:  Chris Buck and Jennifer Lee have directed this film.

The ‘Frozen’ movie is considered the best Disney animated movie as it has become the highest-grossing film of all time. Moreover, it was a great commercial success and marked the most-watched movie worldwide for its screenplay, themes, music, visuals, and voice acting. The film represents a princess (Anna) who travels with an iceman and his reindeer to find her newly crowned Queen Sister (Elsa). Elsa has some ice powers that she accidentally uses and traps her Kingdom place into eternal ice. Girls love Elsa and Anna a little too much. Not to mention the cute little Olaf!

6. The Nutcracker and the Four Realms

Writer: The movie was written by Ashleigh Powell.

Releasing date: The movie was released on Netflix on October 29, 2018.

Director: Lasse Hallstrom and Joe Johnston have directed this film.

Running Time: Its running time is 99 minutes (about 1 and a half hours).

The best Christmas movies on Netflix for your little ones with some adventure and speculation charm? The ‘Nut Cracker and the four Realms’ is the best choice! The movie tells a story about a young girl (Clara) who wants a magical key to unlock a mysterious box that contains some valuable gift. Meanwhile, a golden thread takes her to the key, but it soon vanishes into a peculiar and strange parallel world. Here, she meets a captain (Philip), regents, and a group of mice who lead over three realms. Will Clara and Philips enter the fourth realm to retrieve the key?

Writer: Matt Lieberman and David Guggenheim are the writers of the movie.

Releasing date: The movie was released on Netflix on November 22, 2018.

“The Christmas Chronicles” tops the best comedy Christmas films on Netflix. The movie plot revolves around Teddy and Kate, who find Santa Claus in their house. They jump into the Sleigh of Santa, but it accidentally crashes, and all Santa Claus presents are lost. As Christmas day approaches, it is up to Santa and children to gather the presents and correctly deliver them all. Do you think they will be successful in their mission or not? Find out!

Christmas is on its way, and everyone wants to enjoy their special holidays with fun and entertainment. So, what better idea than Netflix and chill? Netflix has covered many of the Christmas classic original films you will fall in love with.

We have listed the 14 best Christmas movies on Netflix for adults and kids in this article! Pick yours now, find a cozy place, a cup of hot coffee, and of course, Netflix. If you have still got some time up your sleeves you can charm your kids with some of the best entertainment apps during the coming holiday season.

8 Ways Technology Is Changing How We Do Business